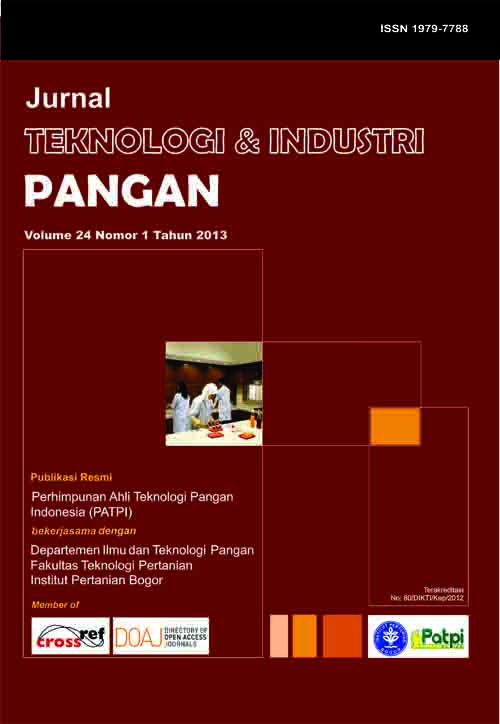 Anthocyanin is a group of bioactive compound found to be abundant in black glutinous rice. It has been widely studied for their health beneficial effect. Hydrolysis of anthocyanin glycoside into anthocyanidin and sugar by β,D-glucosidase is presumed to be the first step in anthocyanin metabolism. Enzymatic degradation of anthocyanin was reported to produce not only more stable compounds, but also healthier compounds with better bioavailability. Some species of Lactic Acid Bacteria showed β,D-glucosidase activity. The research aims to study the functional property’s change’s of anthocyanin extracted from black glutinous rice as an antioxidant compound after being fermented using Lactobacillus plantarum Mut 7. The results showed that fermentation process did not give a significant effect to the antioxidant activity of black glutinous rice anthocyanin. The antioxidant activity as determined by Radical Scavenging Activity and Ferrous Reducing Activity Power value were 59.2% (6 hours of incubation, 30 mM anthocyanin) and 96.7% (5 hours of incubation, 10 mM anthocyanin). The lactic acid bacterial count increased up to 2 log cycle after being fermented for 5 hours.