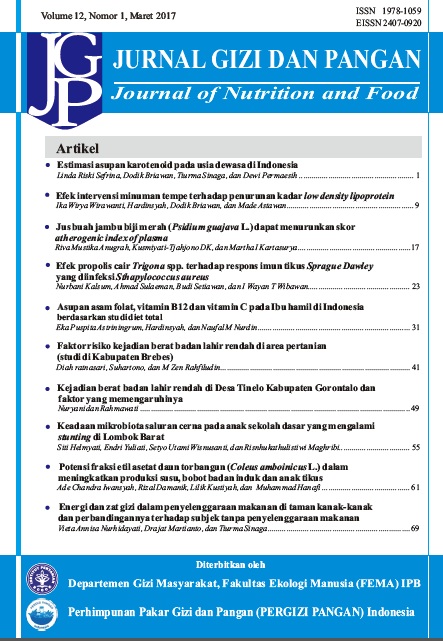 The aims of the research were to investigate the potential medicine from ethyl acetate fraction of Coleus amboinicus L. for improving milk yield, body weight of rats and its effects on growth of the rat pups. Galactagogue activity was evaluated in terms of quantity of milk produced from the rats treated with ethyl acetate fraction of torbangun leaves (FEA), and commercial milk booster contained ‘katuk’ leaves extract (AF). Lactating rats (n=5) of Sprague dawley with six pups were fed with FEA and AF in the amount of 30 mg/kg and 50 mg/kg body weight, respectively. The feed were given orally every two days and starting from day 2 after giving birth until day 14. The performance of milk production was measured along the experimental period by weight-suckle-weight method. The rates of pups’ growth were measured as the weight gain along experimental period. The rats fed with ethyl acetate fraction of torbangun leaves produced higher milk than AF and the control groups, while FEA did not affected the body weight of rats in comparison to the control groups. Ethyl acetate fraction of torbangun leaves was identified to increase milk production by 17%, while AF by 22%. The mean of yields produced by the rats during lactation period for FEA, AF and control were 7.12±1.16, 7.43±1.04 and 6.07±0.85 g/pups/day, respectively. The FEA administration showed gradually increased of rat pups growth and body weight gain significantly in pups 2-14 days old compared to the control group. The present study reveals the ethyl acetate fraction has the potency as a remedy for improving milk yield without influencing the rats.