The development and widespread use of internet technology has changed the way people communicate in everyday life. The most important indicator of this transformation is the emergence of new communication devices with internet technology called "digital communication devices" (Werbin 2012). Facebook, Twitter, Instagram, and similar social networks that are used online and virtual platforms such as web sites, microblogs, are new communication tools that are used as transformations of existing communication tools such as printed communication devices (journals, newspapers, etc. ), visual (television, cinema, etc.) and audio (radio) communication devices. The transformation is also followed by the way we donate, namely the transition from the offline system (directly giving to the mosque or orphanage) to the online donation system. One of the crowdfunding platforms (online donations) in Indonesia is Kitabisa.com. Lots of excess donations online, but the proliferation of online fraud makes the public (prospective donors) reluctant to participate in this program. So there needs to be a communication strategy between fund raisers and prospective donors to encourage public participation. This study used descriptive qualitative method. Techniques for collecting data with in-depth observation interviews and document checking. The interview was conducted by interviewing the Kitabisa.com party as the party that built the donation and fundraising site for initiatives, campaigns and social programs that had the motto "Let's work together to build Indonesia!". Data analysis was performed using data analysis of Miles and Huberman. Message element theory in social media and participation theory is used in this study which discusses how message elements in a social media / donation site. To increase audience participation in fundraising through online sites, Kitabisa.com by uploading content that contains storytelling and video formats in each campaign that will be done on social media. Update campaigns, progress reports from each campaign, photos in the form of proof of activity are also regularly displayed on the website. This is done consistently to maintain the quality of the campaign and maintain public trust and participation. 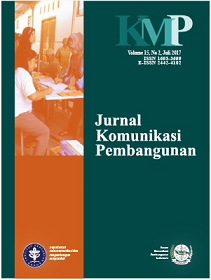 Jurnal Komunikasi Pembangunan is licensed under a Creative Commons Attribution-ShareAlike 4.0 International License.
Published by the Department of Communication and Community Development Sciences, Faculty of Human Ecology, IPB University in association with FORKAPI (Association of Development Communication Studies in Indonesia).