Information about fishing as a whole is still very minimal due to limited fisheries statistics issued by the Regional Government as on the island of Timor. Fishing activities on the island of Timor is still implementing a simple system, especially when seen from the specifications of fishing units that have not been using equipment that is complex in its operation and ability of fishermen. In general, fishing activities are not only determined by the fishing units, but also is influenced also by natural factors is seasonal. Changes in oceanographic conditions causing changes to the abundance of fish in one place due to the migration of fish, fish behavior and so forth. This, in turn result in changes in the fishing ground for fishermen activity is strongly influenced by sea and wind conditions so that the fishing areas are not fixed throughout the year. The purpose of this research activity are: 1). Knowing the specifications of fishing units used to catch snapper in Kupang district, 2). Knowing snapper fishing area (Lutjanus sp.) In Kupang district, and 3). Analyzing catch snapper (Lutjanus sp.) from the type of fishing gear used to catch snapper in the district. The study was conducted in January-April 2010. Field data collection was done during the month of February 2010 to take a place at Harbor Beach Fishing Tenau-Kupang, East Nusa Tenggara Province. Data on fishing areas and fishing units are acquired, classified and analyzed descriptively by tabulation and display map images, whereas analysis of variance test (ANOVA) one-way classification is used to determine the monthly productivity of snapper fishing gear that is used to catch snapper. The main types of fishing gear used to catch snapper (Lutjanus sp.) in waters off Kupang district is the basic tow, fishing yield, and bubu. Fishermen fishing snapper (Lutjanus sp.) based in the PPP Tenau, Kupang district generally operate in waters that coral reefs.That location is an area not far from the base, the city of Kupang (1 mile) and about Kera Island (4 miles), and enough of the base area, ie around Semau Island (12 miles), District Papela (25 miles), Sub Landu (40 miles) and the District of Lole (60 miles). The size of snapper caught by tow basis greater than snapper caught with rod stretching and bubu. Monthly catches snapper ever obtained from the basic tow operation, ie 57% of all snapper obtained during 14 months; fishing yield and bubu each producing snapper as much as 37% and 6%. 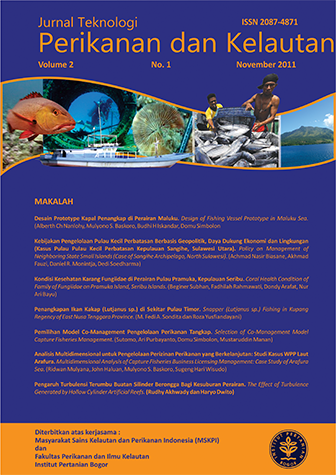 ##plugins.generic.relatedArticle.noArticleFound##
Relatedarticleplugin was unvalidated product, Click here to support us