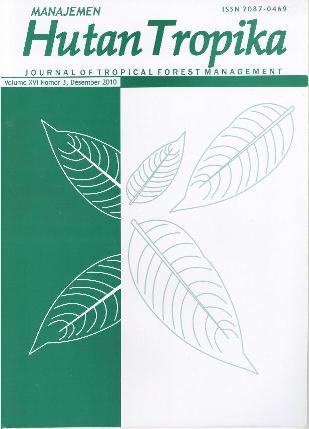 Conflicts between government and local peoples over national park resources have been occurring in Indonesia, for instance in the Halimun-Salak Mountain National Park (TNGHS).  The research were directed to describe the opinion, relationship, access, and rights of the peoples in term of the TNGHS resources utilization.  Further objectives were to identify the causes of the settlement problems at the TNGHS and to formulate the alternative solutions of the problems.  The results showed that conflicts at Halimun-Salak areas have been occurring since the Dutch colonization period. The policy of the TNGHS area expanding (from 40.000 to 113.357 ha) in 2003 and different perception between the government and the peoples regarding to the values to the forest had made the conflicts extended.  Choosing the most appropriate solution from 3 alternative solutions namely: solving the problems of resettlement and law enforcement, revising the policy of TNGHS extension, and accommodating settlement in the special zone were strongly recommended.

Related Article based on the article keywords

The State and the Development of Industrial Plantation Forest