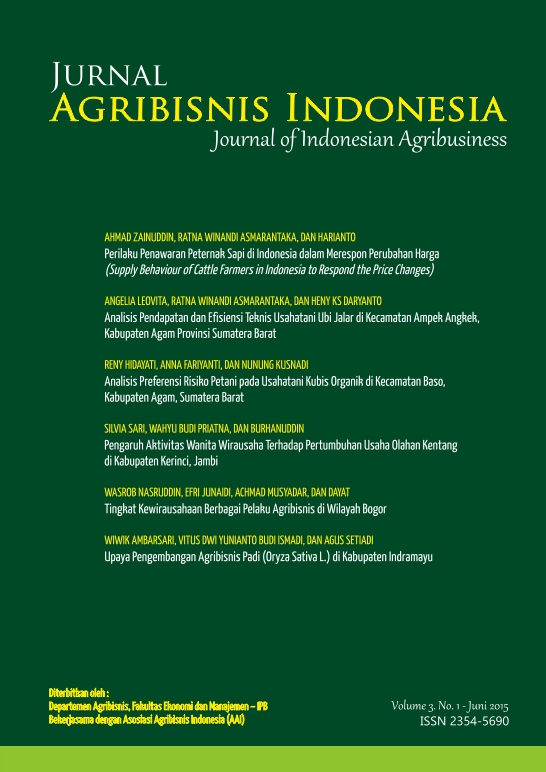 The position of farmers as the main actors (on-farm) in agribusiness systems are generally in a weak position, even in many cases are in the weakest position. The aims of this paper are: (1) to know the level of entrepreneurship each subsystem agribusiness input, on-farm, marketing and agro-industry, and (2) to analyze the relationship between the level of entrepreneurial actors of agribusiness based on different subsystems and different types of commodities sought (crops and horticulture). The study was conducted in Bogor area in June 2013 to December 2013 with 108 respondents, consisting of 55 people in on-farm subsystem and 53 people on off-farm subsystem. The method of analysis performed is descriptive and non-parametric statistical analysis. The level of entrepreneurial agribusiness in general (regardless subsystems and commodities) showed that use of self-knowledge test tends in strong category (55%) and moderate (45%). A high percentage (> 50 %) in the strong category owned by the actors on the off-farm subsystem. Meanwhile, the level of entrepreneurship using of character test tends in the low category (63%) and relatively high (37%). This character test showed horticultural farmers tend to have entrepreneurial potential is higher than crops farmers. The level of entrepreneurship agribusiness based agribusiness subsystem (on-farm vs off-farm) showed a significant relationship to the significant level (α) of 25% on the in self-knowledge test, while the character test is not significant. Furthermore, based on different types of commodities (food vs horticulture), for the self-knowledge test showed no significant relationship, whereas the character test is significant at the significance level (α) 15%. This research can be the basis for choosing the farmer/group of farmers who will receive assistance from the government for success of government programs increase of farm productivity such PUAP and LM3 program.