The Balinese is comprised of genealogical patrilineal clans named as soroh. However, remnants of ancient Bali Mula communities have their own local genealogy which differ from the general soroh. The Pasek Trunyan together with Pasek Kayu Selem, Pasek Celagi, and Pasek Kayuan are part of Bali Mula which believed to be descendants of one ancestor, Empu Kamareka. Here we reported genetic variation of the Terunyan society. The microsatellites Y-chromosome markers (DYS19, DYS390, DYS393, and DYS395) were used in this study. There were 12 alleles found and the result showed the low genetic diversity (D = 0.28 + 0.05) within Terunyan society. Nine haplotypes based on allelic combination were found, dominated by major haplotype with frequency of 0.50 which spread out in many genealogical lineage called dadia. The haplotype data showed that Terunyan society derived from many gene sources. 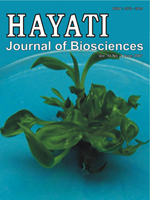