Lamp technology as a tool for fishing has long been used by Indonesian fishermen and grow not only for pelagic but also for demersal species such as crustaceans. Rajungan is one of the important crustaceans that have high economic value. Fishermen catch the crab using a trap or bottom gillnet. The two fishing devices are operated passively so that they need a tool to attract the crab. In this study tried to develop lamp technology as a lure of crabs. Responses are an important part of knowing crab behavior. The research was conducted in an experimental laboratory, where environmental conditions were controlled by researchers. The study aimed to analyze the patterns and response rates of crab to different light, including purple, blue, green, orange, red and white. A comparative descriptive analysis is used to determine the differences in patterns formed. The test results showed that the pattern of the crab against different light divided into directly and indirectly. Rajungan was approaching to light direclty for 0,072 m/s and indirectly for 0,036 m/s. The fastest crab rate in blue at 0.081 m/s dan the latest crabs arrive the red light at 0,026 m/s. The rate and pattern of the crab closer to white and blue light are shorter and has a short trajectory that can be suggested as a tool to used bottom gillnet, while the red and orange colors that have a slower rate of crab can be used as a trap. 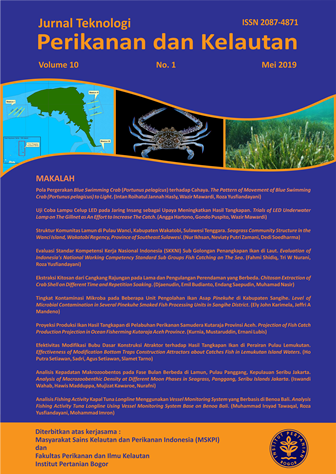 This work is licensed under a Creative Commons Attribution-NonCommercial-ShareAlike 4.0 International License.